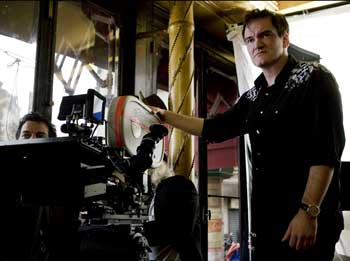 Known for his memorable character monologues in True Romance, Pulp Fiction, and Reservoir Dogs, Quentin Tarantino the writer constantly competes with himself to outdo his previous work.  Tarantino has finally arrived at that moment in his opinion for his latest cinematic effort INGLOURIOUS BASTERDS, his first period film starring Brad Pitt and newcomer Christopher Waltz who steals the show from Pitt’s Lieutenant Aldo Raine.

While most filmmakers cannot pull off long character speeches, Tarantino often excels in this department with lengthy character exposition within his films.  In INGLOURIOUS BASTERDS, the first scene is a 20 minute introduction to the Nazi Jew Hunter - Colonel Hans Landa  (Christopher Waltz) who makes polite conversation with a French farmer possibly harboring Jews.  Colonel Landa or Detective Landa, as he refers to himself, breaks the French farmer not with interrogation style tactics but with a rational explanation to why he must do the right thing for his family.  This chilling speech from Col. Landa sets apart this character from any Nazi portrayal ever written for cinema.

As far as his writing, Tarantino feels his scenes are meant to “stand alone” and compares them to listening to a greatest hit album.  Although “self-aggrandizing” according to Tarantino, he says his greatest hit would be the Sicilian speech in the Tony Scott directed True Romance starring Christian Slater, Patricia Arquette,  Dennis Hopper, Christopher Walken, and a cameo by Tarantino’s head basterd Brad Pitt as a pothead.

“That was my best scene.  I’m not saying it’s the best scene the way it works in the movie but as far as a stand-alone scene, that was probably my best work.  And I knew I would never top that. “

Tarantino felt he had come close with his other work but he didn’t reach that level of excitement until recently.  “When I wrote the opening scene in this movie with the Jew Hunter and French farmer, I go ‘I think I’ve finally topped it.’  “That’s up to you to decide but I think I finally kicked it up.”

Christopher Waltz who won the Best Actor Prize at the Cannes’ Film Festival for his role as Colonel Landa, agrees with Quentin’s assessment and describes his role as the “best part ever written in the history of drama” comparing it to Greek drama and Euripides.  However, he does admit he didn’t understand Quentin’s talky scenes until he saw Death Proof.  He describes the scene with Rosario Dawson and her gal pal’s long and pointless dialogue that proved very interesting.  That’s when he says it “clicked” and understood how Tarantino “takes a genre and lifts it into a level of art.”

Actor, writer, and comedian B.J. Novak from TV’s The Office stars as one of the basterds in Tarantino’s film and describes Tarantino as hard working and in direct competition with himself.

Michael Fassbender (300, Jonah Hex), a film critic and British soldier in the film,  can also attest to Tarantino’s work ethic and impressed most by his “wealth of knowledge.”  “There’s no element left unturned.  Every tiny character, he (Tarantino) has has a backstory.  It’s incredible.”

Regarding the director’s love of filmmaking – “The great thing with Quentin is that he comes everyday with so much enthusiasm, so much love and passion for the work – it’s so infectious.

German-born actress Diane Kruger (Bridget Von Hammersmark) who almost didn’t get the role because Quentin didn’t believe she was German, said of the INGLOURIOUS BASTERD director, “he was like a child next to the camera – yelling ‘more blood, more blood’.

And those who have worked with him say his enthusiasm doesn’t wane when off set.  According to B.J. Novak, Tarantino is always the life of the party.

“We would be out until 4 or 5 in the morning in Berlin eating, drinking, talking about movies, or in my case, listening about movies, and the next day, there he is - first guy on the set with 25 shots he wants to add to the list that day.  For a guy who seems to have so much fun, it’s really incredible how hard working he is.”

Tarantino admits to not only competing with himself but with other filmmakers as well. His buddy system includes Robert Rodriguez, Rick Linklater, and Paul Thomas Anderson who all share a similar aesthetic but it is with Paul Thomas Anderson in which he shares a friendly and healthy rivalry.  They try to outdo each other constantly.

When asked what he counts as his proud moment and his biggest disappointment, Tarantino names winning the Palm D’Or at the 1994 Cannes Film Festival for Pulp Fiction as a triumph but his saddest moment which “hurt his feelings’ was the box-office flop of Grindhouse,  the double feature bill of his Death Proof and Robert Rodriguez’s Planet Terror.  But he takes comfort in that the theatrical double feature will soon be released as Grindhouse on special edition DVD (each film was released separately).

Tarantino is not losing sleep over his last film but he doesn’t get more than five hours sleep at night when directing.

“As a director – anybody who gets more than 5 hours of sleep at night must not be so passionate.  It’s just the job.  You’re not going to get more than 5 hours sleep.  I mean if you can sleep like a baby, you’re doing something wrong.”