Watch our unedited interview with the late actor.

The Sons of Anarchy star had us laughing with his funny stories from shooting the movie Pacific Rim and imitating director Guillermo del Toro. We've only seen him in serious roles as a motorcycle gangster and the hero in the monster movie.  Good thing he pulled out of playing Christian Grey in the Fifty Shades of Grey movie adaptation because his calling is a comedy. Watch the interview.

The Dominican-American actress appeared in three films (Out of the Furnace, Blood Ties) in 2013 with a juicier role in Star Trek Into Darkness. We sat down with her for the JJ Abrams movie and we love that she speaks up for herself and women.  Glad to see someone fighting for the right roles. She also gave us the scoop on her next role as a Guardian of the Galaxy and the Avatar sequels. Watch interview.

4. Anthony Markie Interview: Marky Mark vs The Rock: Which Pain & Gain Star Bench Pressed The Most

We caught up with rising star and Pain & Gain's Anthony Mackie in Miami who starred alongside Dwayne Johnson and Mark Wahlberg in the true story of body builders turned kidnappers. For the role, all three stars pumped iron to play the muscle-bound criminals. When CineMovie's Zay Zay asked who could pump the most, he didn't lie and say himself. For that we give the Captain America: The Winter Soldier star props. Mackie had a good 2013 with 5 movie roles alongside Ben Affleck (Runner, Runner), Benedict Cumberbatch (The Fifth Estate), and Josh Brolin, Sean Penn, Ryan Gosling in Gangster Squad.  We caught up with him at Disney D23 where he talked about his upcoming role as the Falcon in the Captain America sequel.

5. Gina Rodriguez on Saying No To Stereotypes

Like Zoe Saldana, up-and-coming actress and star of the indie drama, Filly Brown, doesn't follow the Hollywood herd and isn't afraid to say "no" roles to that are stereotypical of minorities. We hope to see more of the strong actress.  Watch interview.

Not only was it one of my highlights of the year to sit down with the Mexican director/producer while he was  promoting his horror hit Mama which he produced but kudos to del Toro for finding new filmmakers like Mama's Andres Muschietti and helping him produce Mama. The Hellboy and Pacific Rim director was also so down-to-earth and passionate about his work that he makes you feel like you're conversing with a fellow cinephile and not a Hollywood persona.  He also gave us tips to writing a horror movie.

7. Danny Trejo's Secret to his Success

Who doesn't like Hollywood nice guy Danny Trejo?  The down-to-earth actor has been around Hollywood for a long time and the Machete Kills star still manages to keep things in perspective. We like what he had to say when we asked him what's the key to staying in the Hollywood game. Watch interview. 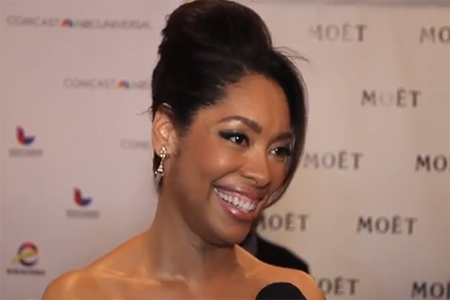 The Suits and Serenity actress stands at nearly 5'10, but she tells us she doesn't shy away from wearing high-heels, but she does admit that although she plays tough female roles, they are usually single, strong women. Watch interview.

9. Michael B. Jordan on Playing a Superhero

Michael B. Jordan gave one of the best performances of the year in Fruitvale Station in the true story of Oscar Grant III, the 22-year-old killed by BART police. Besides the film, he also talked about the possibility of playing Johnny Storm in the reboot of Fantastic Four.  We agree with the young actor that the color of the character shouldn't matter. We know the Chronicle's star can act so we hope the Fantastic Four reboot will cast him as the Marvel character.  Watch interview.

The two stars of Drinking Buddies talk about their drinking habits and call out fellow Anna Kendrick as a "light-weight" while promoting their new film about beer-making. So of course the conversation turned to brewskis and somehow President Obama got into the interview.