Hugh Jackman and Jake Gyllenhaal are two pissed off characters in the crime thriller PRISONERS and both are sharing a movie poster looking grim.  Take a look at the latest one-sheet for the movie also starring Viola Davis, Melissa Leo, Maria Bello and Terrence Howard.

In the PRISONERS, Jackman and Terrence Howard's little girls are kidnapped by someone they suspect drove away in an RV. Paul Dano (There Will Be Blood, Looper) plays the wacko accused of kidnapping two children, and boy does he look like a Jeffrey Dahmner-type killer.  Jake Gyllenhall is the detective on the case, but of course, the police are no help so Jackman's Keller Dover takes matters into his own hands, determined to find his little girl and her friend no matter the cost.  We've never seen Jackman this angry, even as the Wolverine.  Our bet is on vigilante Jackman in this dramatic thriller. Watch Trailer

PRISONERS is in theaters this fall starting September 20, 2013 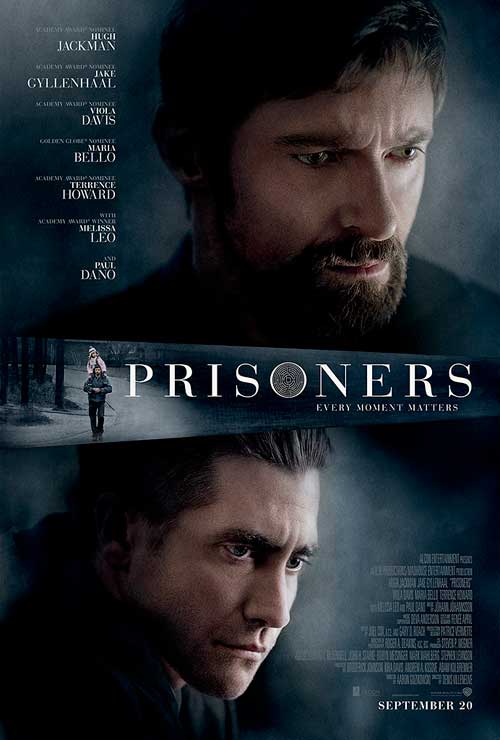 How far would you go to protect your child?  Keller Dover (Jackman) is facing every parent’s worst nightmare.  His six-year-old daughter, Anna, is missing, together with her young friend, Joy, and as minutes turn to hours, panic sets in.  The only lead is a dilapidated RV that had earlier been parked on their street.  Heading the investigation, Detective Loki (Gyllenhaal) arrests its driver, Alex Jones (Paul Dano), but a lack of evidence forces the only suspect’s release.

Knowing his child’s life is at stake, the frantic Dover decides he has no choice but to take matters into his own hands.  The desperate father will do whatever it takes to find the girls, but in doing so, he may lose himself, begging the question: When do you cross the line between seeking justice and becoming a vigilante?