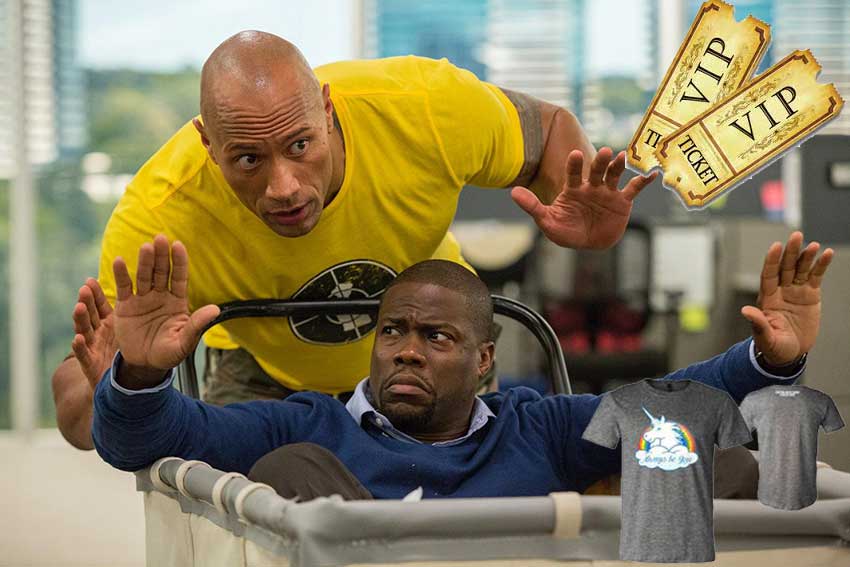 Kevin Hart and Dwayne Johnson team up in the buddy comedy, CENTRAL INTELLIGENCE and CineMovie has your chance to win movie tickets to see the film at the Hollywood movie premiere (Los Angeles) on June 10. In addition to walking the red carpet, two winners will receive a movie prize pack wth loads of goodies. Read on to find out what you get if you're one of the lucky winners.

The story follows a one-time bullied geek, Bob (Johnson), who grew up to be a lethal CIA agent, coming home for his high school reunion. Claiming to be on a top-secret case, Bob enlists the help of former “big man on campus,” Calvin (Hart), now an accountant who misses his glory days. But before the staid numbers-cruncher realizes what he’s getting into, it’s too late to get out, as his increasingly unpredictable new friend drags him through a world of shoot-outs, double-crosses and espionage that could get them both killed in more ways than Calvin can count. Watch Trailer

Each winner will also receive a prize pack that includes the following:

To enter the CENTRAL INTELLIGENCE Ticket Giveaway, click on the form below.

NO PURCHASE NECESSARY. MUST LIVE IN THE LOS ANGELES AREA

PROMOTION DESCRIPTION: CENTRAL INTELLIGENCE Ticket Giveaway (“Sweepstakes”) begins on or about June 1, 2016 at 6:00 p.m. Eastern Time ("ET") and ends on June 8, 2016 at 11:59 p.m. ET (the “Sweepstakes Period”).  At the end of the Sweepstakes Period, a random drawing will be conducted to select winners from among all eligible entries received, as more fully set forth in the OFFICIAL RULES.  Entry in the Sweepstakes does not constitute entry into any other promotion, contest or sweepstakes.  By participating in the Sweepstakes, each entrant unconditionally accepts and agrees to comply with and abide by these Official Rules and the decisions of CineMovie TV, 2700 Arlington Ave. Ste. 101 Torrance, CA  90501 (“Sponsor”), which shall be final and binding in all respects.