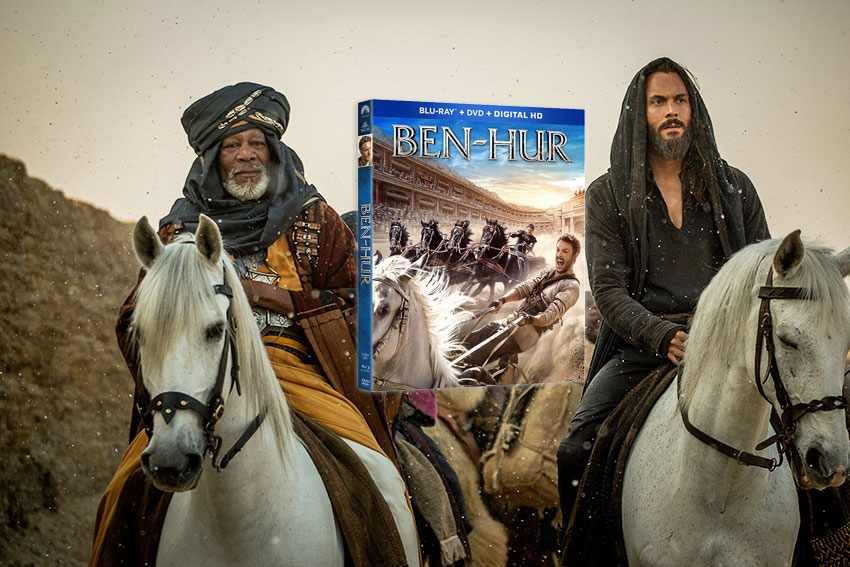 BEN-HUR starring Jack Houston, Morgan Freeman, Toby Kebbell and Rodrigo Santoro is coming to Blu-ray Combo Pack and DVD December 13, 2016 with a bonus $10 movie card. CineMovie has 2 copies of BEN-HUR Blu-ray/DVD Combo Pack to giveaway. Read on to find out how to enter.

BEN-HUR is the epic story of Judah Ben-Hur (Jack Huston), a prince falsely accused of treason by his adopted brother Messala (Toby Kebbell), an officer in the Roman army. Stripped of his title, separated from his family and the woman he loves (Nazanin Boniadi), Judah is forced into slavery. After years at sea, Judah returns to his homeland to seek revenge, but finds redemption. Based on Lew Wallace’s timeless novel Ben-Hur: A Tale of the Christ, the film also stars Rodrigo Santoro, Ayelet Zurer, Pilou Asbaek, Sofia Black D’Elia and Academy Award® winner* Morgan Freeman.

To enter the BEN-HUR Blu-ray/DVD Giveaway, click on the form below.

PROMOTION DESCRIPTION:  BEN-HUR Blu-ray/DVD Giveaway (“Sweepstakes”) begins on or about DECEMBER 5, 2016 at 6:00 p.m. Eastern Time ("ET") and ends on DECEMBER 12, 2016 at 11:59 p.m. ET (the “Sweepstakes Period”).  At the end of the Sweepstakes Period, a random drawing will be conducted to select winners from among all eligible entries received, as more fully set forth in the OFFICIAL RULES.  Entry in the Sweepstakes does not constitute entry into any other promotion, contest or sweepstakes.  By participating in the Sweepstakes, each entrant unconditionally accepts and agrees to comply with and abide by these Official Rules and the decisions of CineMovie TV, 2700 Arlington Ave. Ste. 101 Torrance, CA  90501 (“Sponsor”), which shall be final and binding in all respects.